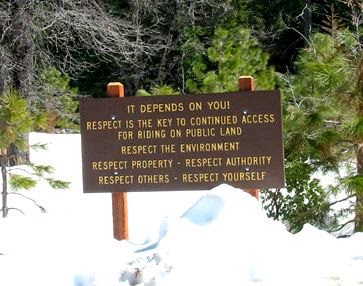 *Permission is hereby granted for reprint

As many motorized recreationists know, I have long championed the use of sound compliant exhaust for motorized vehicles that use public lands.  Most of those efforts over the last 17 years were focused on summer motorized uses including dirt-bikes, dual-sports, and ATVs.

Many states have implemented reasonable sound laws and those rules have contributed to the long-term viability of OHV use on public lands for future generations.  Having common sense regulations in place makes it easier to defend managed OHV use in court against anti-access litigants who had historically cited “loud bikes” as a major complaint in their lawsuits.

The Forest Service recently submitted its proposed Over Snow Vehicle (OSV)-specific travel planning rule to the White House Office of Management and Budget.  That agency proposal was driven by a court decision last year that stemmed from a lawsuit filed by the Winter Wildlands Alliance.  I believe the OSV community will continue to face a growing avalanche of anti-access lawsuits as more National Forests (including the Inyo NF in California) undertake OSV planning efforts.

Being proactive in the development of new recreation “tools” (such as reasonable sound laws) is a smart practice and recreationists should embrace these management implements for use in their land-use tool box.

In 2013, the New York State Snowmobile Association supported a new state OSV sound law based on SAE J2567.  That measure was enacted because some private property owners were closing trails due to excessively loud snowmobiles.  The New York law mirrors similar legislation in Michigan, Wisconsin, and Colorado.

I believe it is time for states that do not have current OSV sound regulations to work with various stakeholders in crafting sound-related legislation that helps protect the sport and shows respect for other trail users.

Don Amador writes on recreation and resource issues from his office in Oakley, CA.  Don is president of Quiet Warrior Racing/Consulting and is also a contractor who serves as the Western Representative for the BlueRibbon Coalition.  He may be contacted by email at: damador@cwo.com