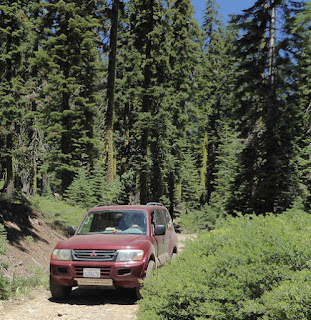 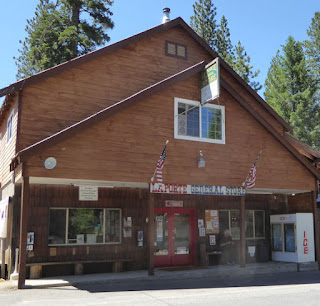 In addition to the main route, there are several four-wheel drive alternate trails that provide more of a driving challenge to key DPs and local history. 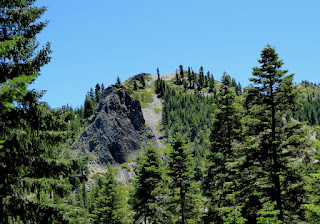 This region of the Sierra is also home to many Native American cultural sites.   The Mountain Maidu people lived throughout the Plumas National Forest.  They still use natural materials for basket weaving and other activities. 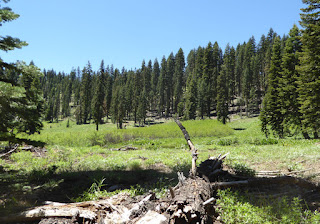 Before starting your Plumas BDT trip, QWR suggests that you acquire a hardcopy or online version of the BDT route.  The Plumas National Forest has a visitor center located just before you arrive at the town of La Porte where your journey begins.  Also, be sure and pick up a Plumas National Forest Map as it will help you navigate the course and highlight additional non-BDT trail opportunities.

After leaving La Porte, DP 1 on Map 1 is Gibsonville where the pavement ends.  This is a great place to step from your vehicle and check out the area.  It also has a wide spot where local users unload their non-street legal OHVs. 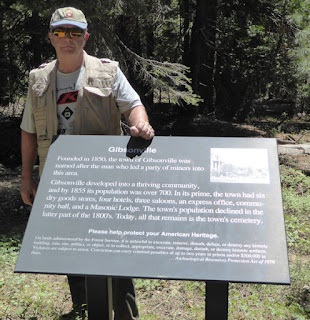 Along this conifer lined route you will see waterfalls, mountain meadows, rugged mountains, and streams.  You will also pass by a snowmobile warming hut and the Pacific Crest Trail (PCT). 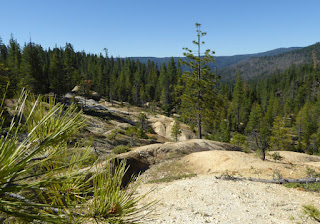 Maps 5 and 6 take you past old mining operations and lumber mills.  DP 18 overlooks the Bean Hill Mine.  This stop invites the traveler to hike some of the area where the evidence of mining is still visible today. 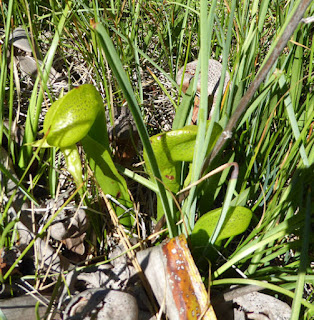 QWR suggests you set aside some quality time at DP 19 to explore the Butterfly Valley Botanical Area.  It is home to hundreds of plant species including the carnivorous California pitcher plant.   Thanks to the wet spring this year, there were a lot of pitcher plants to photograph and enjoy. 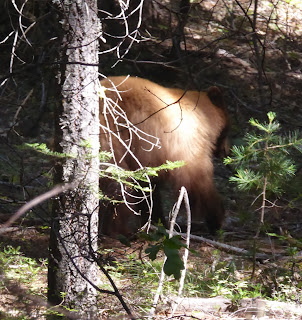 There is also abundant wildlife along this route which includes bear, deer, and many birds. 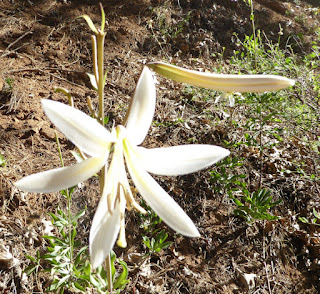 The route on Map 7 starts at the old logging town of Twain.  The Twain General Store and RV Park is a great place to stop for food and/or to stay overnight.   Just across from the store, the BDT crosses Highway 70 where you ascend several thousand feet to the top of the ridge. 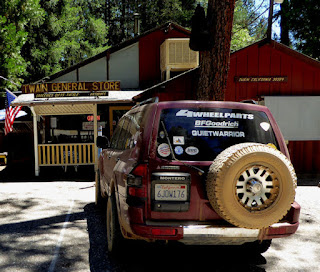 SxS recreationists may want to consider camping at Twain and spend a day or two riding on Map 7’s BDT and other legal Forest roads that stem off of the main trail.  Plumas County has also designated County Road 306 for OHV use which adds important connectivity for non-street legal OHVs. 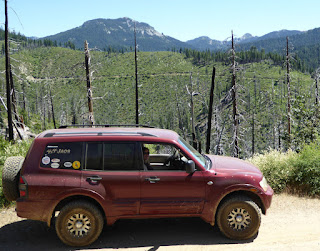 Wildfire History on the Plumas NF

If you only have a couple of days to tour the BDT there are numerous motel options in Yuba City, Quincy, Lake Almanor, and Chico.  There are also designated campgrounds and many dispersed camping areas along the BDT.  The Gold Pan Lodge in Quincy now offers BDT travelers the same discount they afford PCT hikers – just ask for the BDT discount when booking a room.
However, the best way to explore all of the sights and sounds of the Plumas BDT is to plan a 3-4 day vacation so you have time to fully appreciate this remote part of California.

QWR hopes the growing number of adventurists that use the various segments of the BDT will create momentum for the completion of a programmatic state/federal planning effort that will formalize a network of non-paved backcountry routes that connect many of the Golden State’s scenic areas. 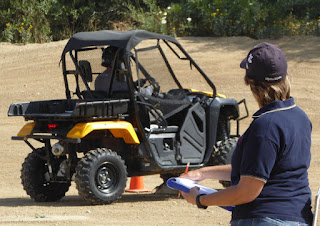 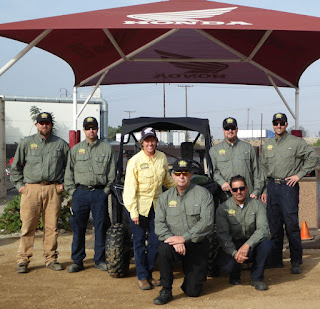 According to the ROHVA website, the association was formed to promote the safe and responsible use of recreational off-highway vehicles (ROVs) manufactured or distributed in North America. ROHVA is accredited by the American National Standards Institute (ANSI) to develop a standard for the equipment, configuration and performance requirements of ROVs. Based in Irvine, Calif., the not-for-profit trade association is sponsored by Arctic Cat, BRP, Honda, John Deere, Kawasaki, Polaris, Textron, and Yamaha. 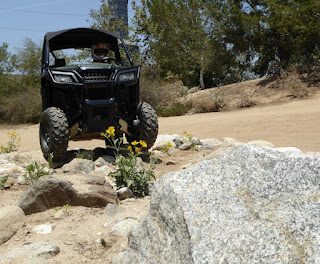 Open Trail Experience - Driving on Rocky Terrain
Andrea Beach did a great job helping our class of six ROV DriverCoach candidates learn about  teaching the various closed range exercises and the open trail experience.  Her many years in off-road racing, driver/rider training, and general OHV recreation added a great deal of depth and richness to the course work.

QWR also appreciates that American Honda hosted the event at their popular training center and for loaning our class the use of three Pioneer 500 SxSs. 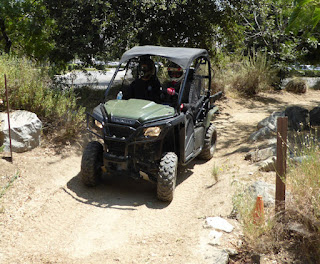 Don Amador, President of Quiet Warrior Racing/Consulting, states, “I feel the training received from Andrea at the Honda facility will enhance my ongoing efforts to champion responsible use of OHVs on public lands. SxS use is an important and growing recreational activity.  I think it is critical for trail-based recreation professionals to aid in the education of both the public and private sector communities.”

“I look forward to doing my part in helping train agency staff and other users in the safe operation of SxS.  Over the next few weeks, I will be busy working to site a number of strategically placed ROHVA-approved ranges,” Amador concludes.

Posted by Don Amador at 7:31 AM No comments: 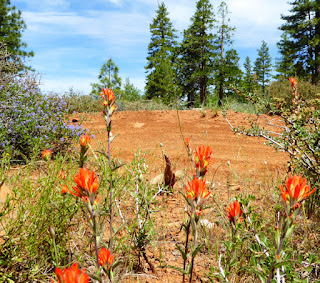 QWR believes the quality of an agency’s OHV trail program is directly proportional to the quality of their partnership with affected communities.   Successful recreation programs do not operate in a vacuum. 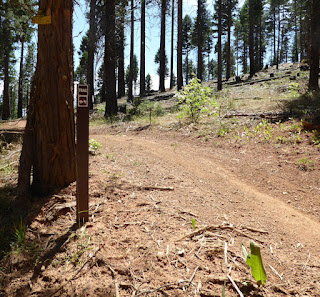 Those trail axioms were further validated at the field tour and public meeting of the California Off-Highway Motor Vehicle Recreation (OHMVR) Commission held on June 2 and 3 in Plumas County and the Plumas National Forest. 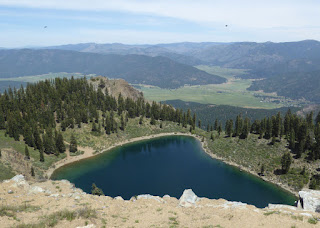 The Plumas National Forest is over 1.1 million acres and is located north of the Lake Tahoe area in the Sierra Nevada Mountain Range.  Over 80 percent of Plumas County is federal land.

On June 2, the 2-day event kicked-off with a pre-tour welcome by the OHMVR Commission Chair, Ted Cabral. 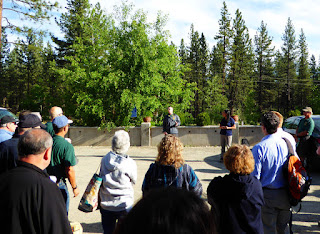 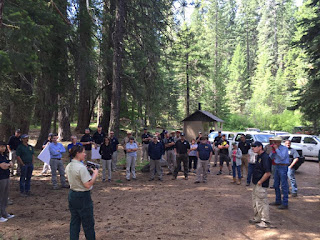 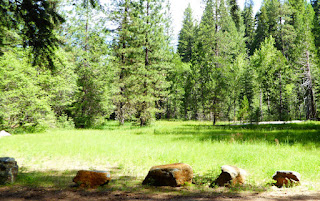 Forest recreation officials and local users were especially proud of their Plumas Backcountry Discovery Trail (BDT) that consists of about 150 miles of non-paved Forest roads and trails. Many of the BDT routes are open to non-street legal “Green Sticker” OHVs. 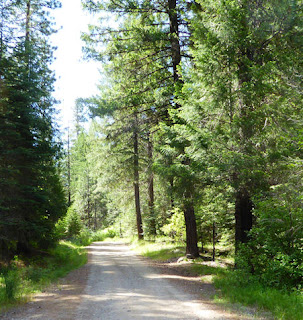 The concept of a formal statewide system of motorized adventure routes was first noted in the California Recreational Trails Act of 1974.  Over the years, subsequent BDT-related legislation was passed and on-the-ground planning efforts were undertaken by Division staff, federal partners, and other stakeholder groups. 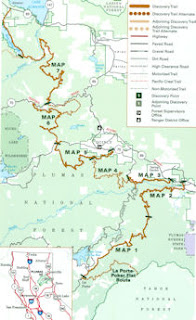 Unfortunately in the late 1990s, work on the partially completed route network was halted when the state was challenged by legal action filed by opponents of the plan.  They stated that a full EIR/EIS must be completed to implement and sign the statewide trail system. 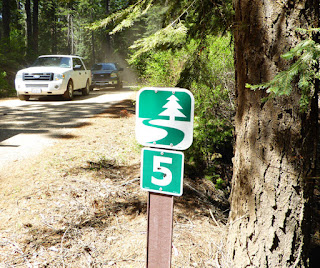 QWR strongly supports development of a programmatic state/federal planning effort that will create a formal network of non-paved backcountry routes that connect many of the Golden State’s scenic areas.

At several of the stops, local user groups and other partners talked about their supportive role in helping the agency ensure that trails are maintained and critical resources protected.  Agency staff credited their partnership with the OHMVR Division’s Grant Program, Plumas County, and local users for helping them fulfill their mission to serve the public in managing a high quality OHV program. 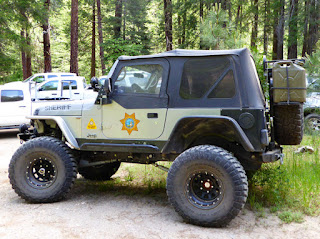 Several of us toured some of the non-paved county roads that were designated by Plumas County as “non-highways.” 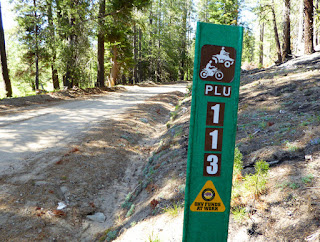 County Road 113 Designated as "Non-Highway" for OHV Use 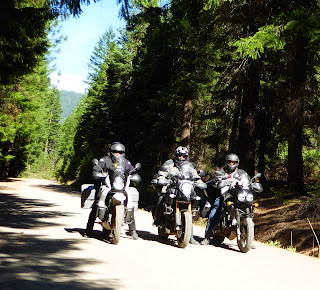 Lisa Mangat, CA State Park Director, stated at the formal public meeting on June 3, that “Access is Preserved through Partnerships.”  QWR believes that statement from a top official in Governor Brown’s administration serves to prove their current and future support of the OHMVR program. 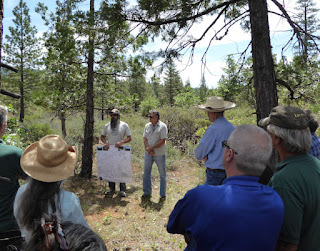 Posted by Don Amador at 7:11 AM No comments: