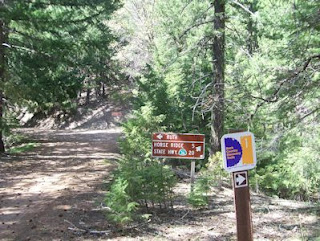 Segment of the 90s-era CA Backcountry Discovery Trail on Six Rivers NF
It is no coincidence the Statewide Motorized Trail System (SMTS) was on the agenda at the recent meeting of the Off-Highway Motor Vehicle Recreation Commission in Redding, California.  Commissioners were informed that a multi-year formal statewide state/federal planning effort is needed to codify and implement SMTS.
In 2009, the Off-Highway Motor Vehicle Recreation Division published its Strategic Plan.  The document outlined a well-crafted long-term vision for operation of the Division and management of OHV opportunities in California. It also stated (pages 33-34) the Division… "anticipates increased interest in the statewide long distance motorized trail system and a need for places to pursue various types of multi-day sport utility vehicle (SUV) touring opportunities."
Link to OHMVRD 2009 Strategic Plan
http://ohv.parks.ca.gov/pages/25010/files/ohmvr%20strategic%20plan.pdf
The concept of a formal statewide system of motorized adventure routes was first noted in the California Recreational Trails Act of 1974.  Over the years, subsequent SMTS-related legislation was passed and on-the-ground planning efforts were undertaken by Division staff, federal partners, and other stakeholder groups.
Unfortunately in the late 1990s, work on the partially completed route network was halted when the state was challenged by legal action filed by opponents of the plan.  They stated that a full EIR/EIS must be completed to implement and sign the statewide trail system.
It has been a dream of many OHV enthusiasts to have a formal network of non-paved backcountry routes that connect many of California’s scenic areas.  It is encouraging to note that motorized adventurists may be one step closer to that reality.
# # #
﻿ 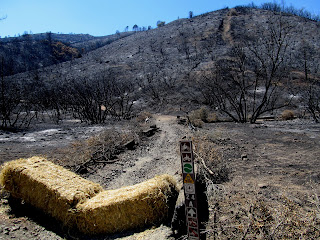 Mill Fire Destroyed Natural and Man-Made Trail Delineators
When catastrophic wildfires hit our national forests, it’s not just the wildlife and timber that are impacted.  Those fires often destroy many of the OHV management tools used to direct motorized recreationists to stay on designated roads and trails.
Trail delineators or barriers are commonly used to help encourage OHV users to stay on the trail and discourage cross-country travel where such use is prohibited.   When the 2012 Mill Fire burned over 80% of the designated trails at the Stonyford OHV Area on the Mendocino National Forest in Northern California, it destroyed thousands of man-made trail delineators and natural barriers such as manzanita, knobcone pine, and other forms of vegetation. 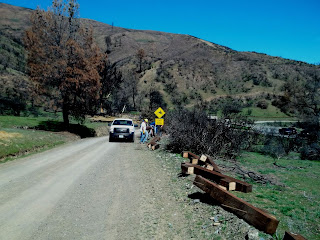 Forest Service and Volunteers Install New Trail Delineators on Mendocino NF
As part of a massive effort by the Forest Service, volunteers, and other partners to get the unit ready for public use by June 1, the agency and volunteer work crews are installing hundreds of new trail delineators along major transportation corridors and near campgrounds/staging areas that were impacted by the Mill Fire.
If you would like to help support these efforts please contact Don Amador at damador@quietwarriorracing.com or Paige Makowski at paigemakowshi@fs.fed.us

Posted by Don Amador at 4:14 PM No comments: