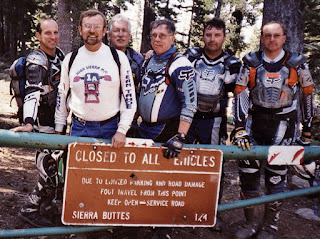 OAKLEY, CA - Iconic visionaries are few and far between in the land-use arena.  John Muir, an avid naturalist, was an early visionary and is considered the father of the modern environmental movement.   Aldo Leopold, a U.S. Forest Supervisor and forester, was also a visionary who promoted a strong land stewardship ethic and fought for creation of federal Wilderness Areas.

I believe the history books will also recognize Clark Collins as a similar visionary that founded a national grassroots movement to promote access to, and responsible recreational use of, federal lands.

For me, Clark’s biggest contribution was securing a permanent seat at the national “land-use table” for managed OHV recreation.  In the B.C (before Clark) era, OHV was largely ignored by other well established federal land stakeholders such as the U.S. Forest Service, BLM, environmental groups, resource industry, and Wilderness advocates.  When those groups met, OHV was often not at the table.  Today we are.

Clark also worked hard to inspire the recreation community to become substantively engaged with land agencies, conservation organizations, elected officials, and other user groups as a way for them to help secure recreational access to designated roads, trails, and area for future generations.

Finally, Clark took it upon himself to mentor budding recreation advocates such as myself and many others.  That effort may be Clark’s most significant contribution to land-use in that it helped father today’s volunteer and professional OHV advocacy corps that is seeded in numerous local, state, and national organizations.

Don Amador has been in the trail advocacy and recreation management profession for almost 30 years. Don is President of Quiet Warrior Racing/Consulting. Don is President/CEO of the Post Wildfire OHV Recovery Alliance. Don served as a contractor to the BlueRibbon Coalition from 1996 until June, 2018. Don served on the California Off-Highway Motor Vehicle Recreation Commission from 1994-2000. He has won numerous awards including being a 2016 Inductee into the Off-Road Motorsports Hall of Fame and the 2018 Friend of the AMA Award. Don currently serves as the government affairs lead for AMA District 36 in Northern California and also serves as the OHV representative on the BLM’s Central California Resource Advisory Committee.  Don writes from his office in Oakley, CA and can be reached via email at: damador@quietwarriorracing.com