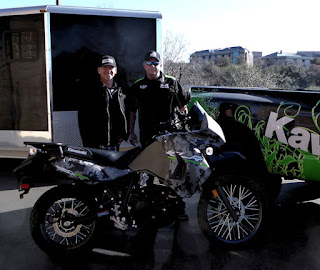 Quiet Warrior Racing wants to thank Kawasaki Motors Corp., U.S.A. and Roseville Kawasaki, a Kawasaki dealer, for their generous support in helping us launch our official Adventure Bike trail stewardship module for 2017 with use of a new KLR 650.

This “celebration” partnership highlights a number of key events.  Those signature components include; Kawasaki’s 50th Year Anniversary, the 30th year anniversary of the KLR 650, Roseville Kawasaki’s commitment to excellence, and Don Amador’s recent induction into the Off-Road Motorsports Hall of Fame.

QWR believes there are a number of factors that are contributing to the rise in popularity of Adventure motorcycling.  First, the 2005 Forest Service Travel Management Rule resulted in the closure of many forest roads historically used by non-street legal dirt-bikes.  This resulted in riders purchasing street-legal adventure or dual-sport motorcycles so they could connect between various trail networks.

Second, many non-traditional  “off-road motorcycle” interests from the tech world, conservation movement, 4x4 community, and other stakeholder groups have found that Adventure riding is a great way to escape the city and experience the great outdoors.

Third, adventure motorcycles can also serve as commuter vehicles during the week.

QWR looks forward to using our Adventure Bike Module in 2017 to better serve the exploring community and promote the many benefits that backcountry motorcycling affords both riders and the economy.